Deconstructing the recent history of demolition, parks, and public safety

This is the first part of the draft of a paper I’m working on about the politics of Project CORE and the history of demolition in Baltimore. Comments or suggestions are welcome! You can also see the photos and links I’ve been collecting for this project using the hashtag #baltimoredemolition on Twitter and Instagram.

About a week ago, on March 27, 2018, Baltimore Mayor Catherine Pugh and Maryland Governor Larry Hogan held a press conference in front of six boarded-up vacant houses on the 1000 block of N. Stockton Street in Sandtown-Winchester. Built between 1886 and 1896, the two-story houses had been slated for demolition for over a year with funding from Project CORE, a state program created to expand the demolition of vacant buildings in Baltimore City.1 Hogan used the occasion to announce the newest phase of Project CORE: the planned demolition of five hundred more abandoned buildings that Pugh claimed in a joint statement “provide a haven for criminal activity in neighborhoods most at risk.” 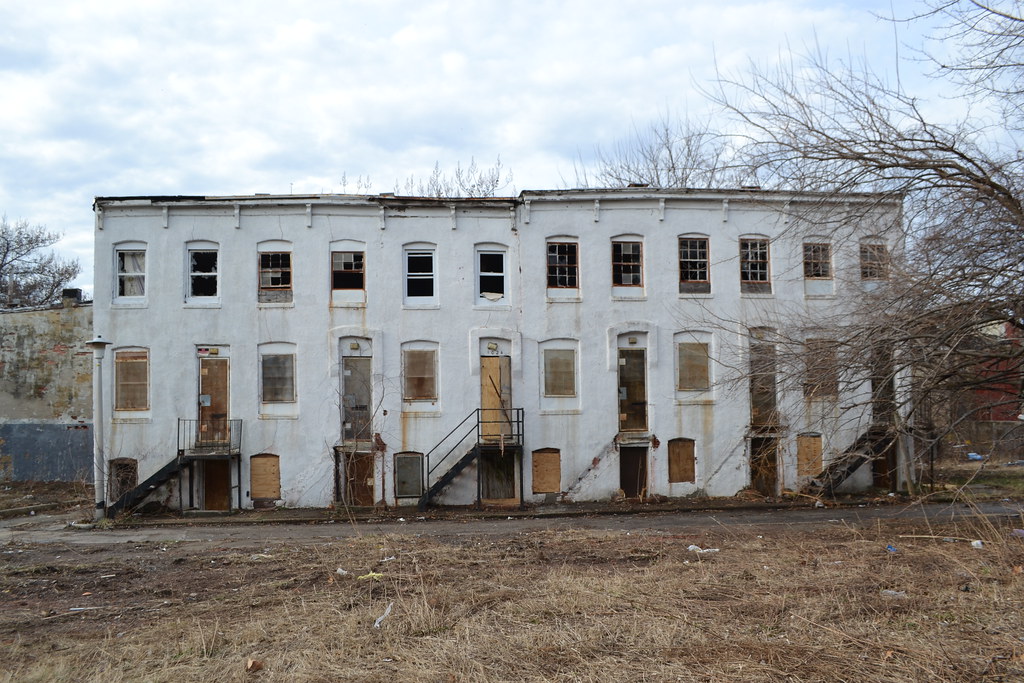 In his speech, Hogan described plans to tear down “decaying and dangerous properties in the highest violent crime areas where the most criminal gang activity is occurring,” suggesting that the city had “designated and prioritized” the targeted vacant buildings as “a contributing factor to violent crime in those communities.” He observed that “vacant and blighted structures too often contribute to the sale and use of illegal drugs and other criminal gang activity” but demolition, together with increased support from state police and proposed legislation to doubling the minimum sentence for repeat felonies involving a gun can improve public safety in Sandtown-Winchester. Hogan then got behind the controls of a John Deere 450D excavator and, with help from a contractor, started tearing down those six houses on Stockton Street. 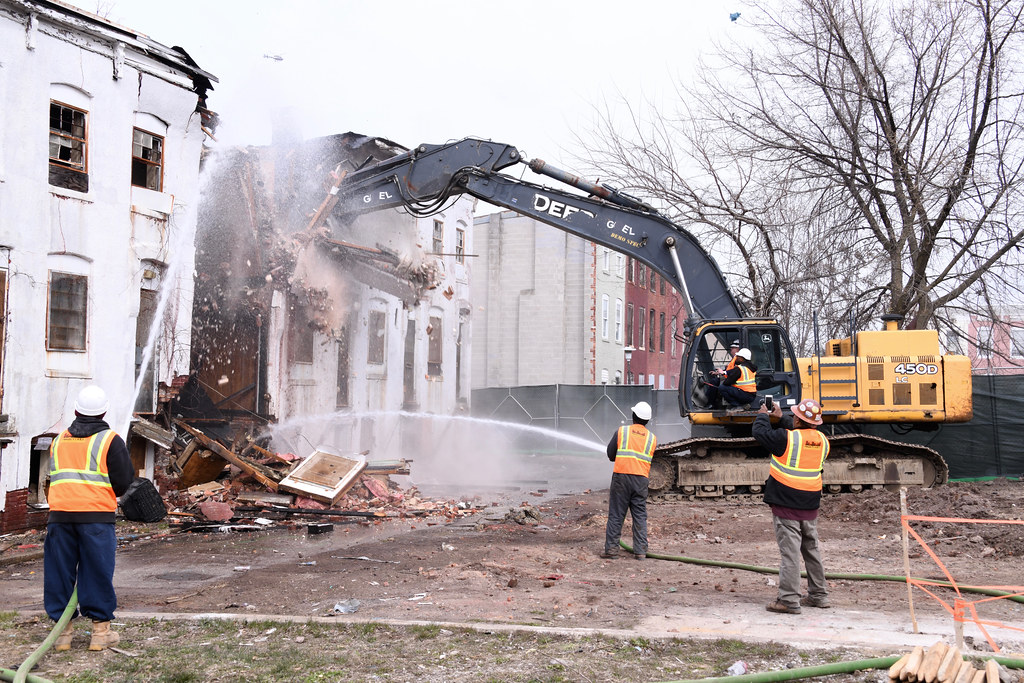 Pugh offered a similar message when she shared a video of the demolition on Twitter, writing: “We are taking them down so that we can build-up our communities. Our citizens and young people deserve this and so much more.” The city’s recently drafted Baltimore Green Network Plan proposed replacing the vacant houses on Stockton Street and nearby blocks with Smithson Park. The city plans to work with neighborhood residents, represented by the Sandtown South Neighborhood Alliance and the Western District Community Relations Council, to find funding, design, and build the new neighborhood park.2 Smithson Park is one of several pilot projects the plan sketched out for west Baltimore neighborhoods Harlem Park, Sandtown-Winchester, Druid Heights, and Upton.

Online reactions to the announcement varied. Laura Baile responded to a video of Hogan’s announcement on Twitter: “Great news. Too many junkies hang out in those abandoned Townhomes and Rob people.” Sander Mednick responded to Pugh: “Start boasting when you actually build something useful. Until then this is much ado about nothing… a rat relocation program.” 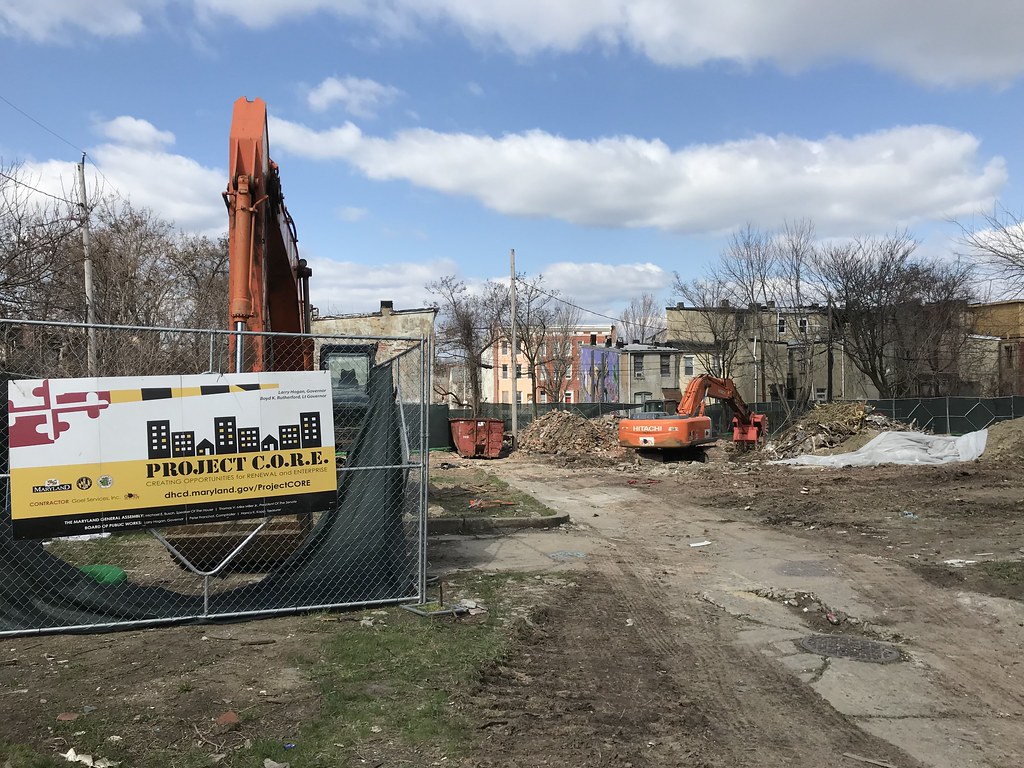 The idea that tearing down buildings improves public safety and reduces crime isn’t unique to Baltimore. A handful of recent examples—Detroit, Michigan in 2010, Camden, New Jersey in 2015, and Chicago, Illinois in 2016—illustrate the recent enthusiasm of elected officials for demolition. About eight years ago, on March 23, 2010, Detroit’s mayor Dave Bing made the case for demolition in his first State of the City address:

Blight is more than an eye sore. Abandoned and dilapidated buildings are hot spots for crime and a living reminder of owners who turned a blind eye and neglected their properties.

By April, the city had started work on the demolition of an initial group of one thousand vacant houses selected by the city’s Police, Fire and Buildings & Safety Engineering departments using 2009 arson and crime statistics.3

In 2015, Camden’s mayor Dana Redd spoke at the demolition of 1510 Louis Street making a similar case:

For many years, we know our residents have battled with blight, crime, and decay… We know safe corridors can really be safe corridors when we remove these vacant properties.4

In 2016, Chicago Alderman Carrie Austin stood in front of a demolition site on the 200 block of West 113th Street and explainined how residents asked her to “beg the city to take them down.” She said demolition would strengthen the community:

We can rid our community of drug-infested buildings, prostitution and every illegal activity that could possibly be in a community. This effort will strengthen this community once and again.6

This recent surge in connecting demolition to policing and public safety predated the beginning of the national foreclosure crisis in late 2007. Vacant Properties: The True Costs to Communities, an influential 2005 publication by the National Vacant Properties Campaign (established in 2002 by Smart Growth America), sought to help planners and elected officials understand “the many and varied costs that vacant and abandoned properties impose upon communities” by gathering quantitative research on costs associated with city services (nuisance abatement, crime and fire prevention), decreased property values and tax revenues, and costs to resident home-owners. Crime featured prominently in the list of municipal services but report did not offer any estimates of the “monetary cost” before concluding “it is clear that vacant properties burden police departments.”7 As evidence, the report cited the now infamous “broken windows” theory popularized by criminal justice scholar George Kelling and James Q. Wilson in a 1982 article for The Atlantic.

Twenty years earlier, Wilson and Kelling argued that, “at the community level, disorder and crime are usually inextricably linked, in a kind of developmental sequence.” They presented vacant buildings not only as potential sites for criminal activity but an enticement for law-breaking:

Untended property becomes fair game for people out for fun or plunder and even for people who ordinarily would not dream of doing such things and who probably consider themselves law-abiding.

While many now find this argument suspect, it is important to recognize that proponents of aggressive policing are not the only people calling for the demolition of vacant buildings. Baltimore’s Black residents have a long history of seeking relief from the hazards of vacant buildings concentrated in historically segregated Black neighborhoods.8 It is clear that vacant and abandoned housing is a symptom of broader systemic problems—automobile-centered development and racial segregation foremost among them—but the hazards, financial costs, and stigma largely effect people living nearby.9 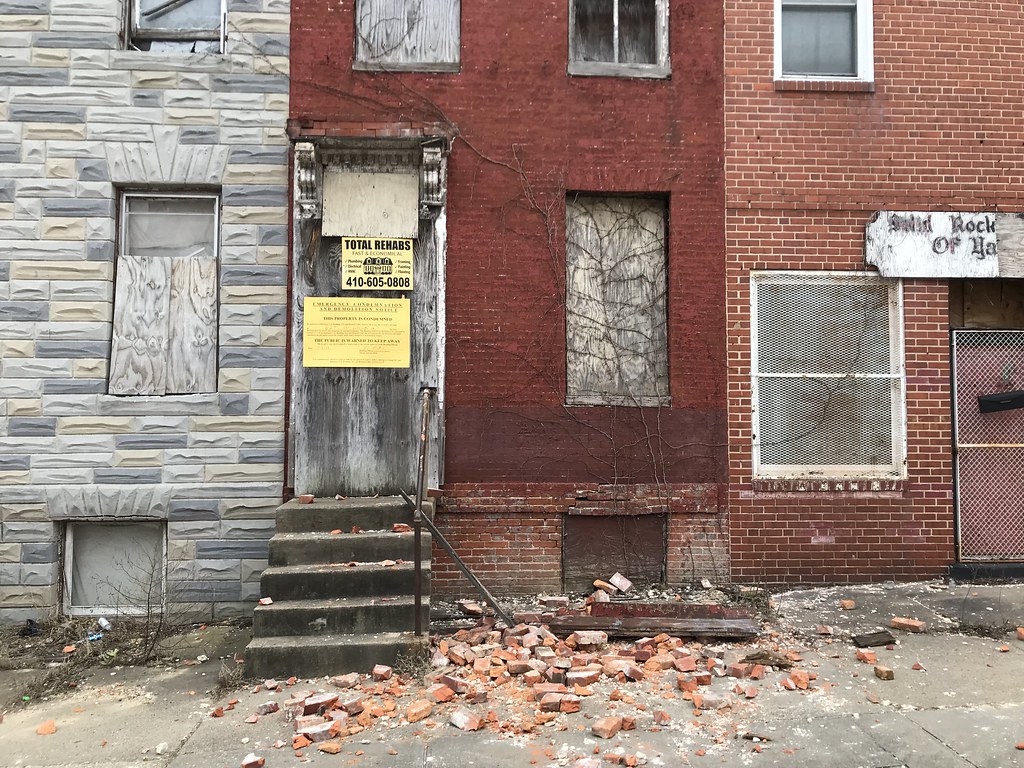 People living near vacant buildings worry over their own safety and the safety of their neighbors. Elected officials and city residents find common ground in beautification—making neighborhoods more attractive place for existing residents and people traveling through—and in public health and safety—keeping neighbors safe from poor housing conditions, violent crime, and addiction.

Baltimore Police Commissioner Edward V. Woods heard demands for demolition from at least one resident on Friday, June 26, 1992 when he visited the 900 block of E. Biddle Street to meet the family of s three-year-old boy, Andre Antonio Dorsey, killed by a stray bullet two days earlier. Regardless of any planned police response, the boy’s mother, Felicia Dorsey, was ready to leave, saying, “Even if the police do try to do something more in the neighborhood, I’m not planning on even staying around to see it. I’m moving.” On a brief walk around the block, Woods met a twenty-year-old neighbor, Denise Lewis, who offered the commissioner some advice: “tear all these rotten houses down and build the kids a playground.”10

Lewis recognized that demolition alone wasn’t enough. Kids in East Baltimore needed safe, well-maintained recreational spaces. But, even as Woods listened with a sympathetic ear, the city’s budget reflected a different set of priorities. In 1992, the city’s Police Department employed 3,594 people (about twenty percent of the city’s total) compared to 803 people employed at the Department of Recreation and Parks (not even five percent of the city’s total). The police had a program budget of $181,695,068—more than five times the $34,052,350 program budget for recreation and parks.11 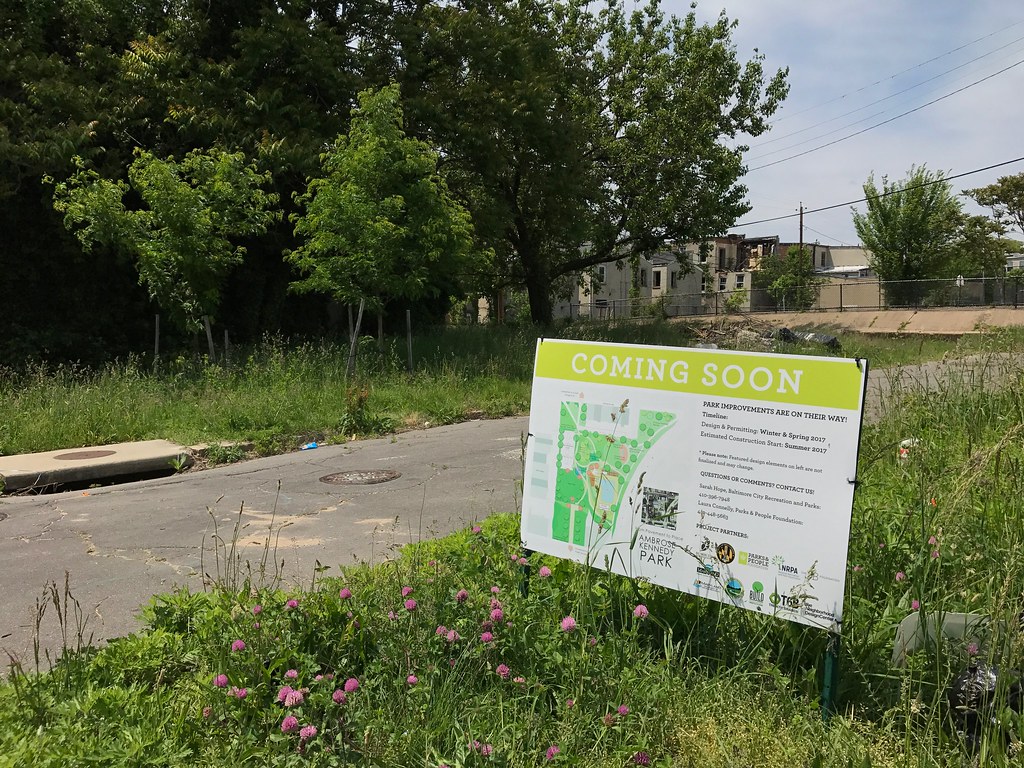 Two decades later, around 2013, East Baltimore residents with Re-Build Johnston Square with organizing support from Baltimoreans United in Leadership Development (BUILD) began advocating for modest improvements in the maintenance of Ambrose Kennedy Park just one block south of the home where Dorsey was killed twenty-five years earlier.12 Ultimately, the advocacy led to a 2016 grant application where the Parks & People Foundation received over $400,000 for the improvement and expansion of the park. In 2017, construction began on the park improvements and, in early 2018, the city began tearing down houses on Eager and Valley Streets.13

While the improvements at Ambrose Kennedy Park are sure to improve the lives of Johnston Square residents, policing, not parks, remains the priority for local elected officials. Between 1992 and 2016, the gap in funding between the Baltimore’s police and parks grew nearly three times over.14 The total number of police employees fell slightly to 3,259—but now made up nearly a quarter of the city’s total employees. Recreation and Parks employed 327 people in 2016—a little over two percent of the city’s total.

The limited funding for city parks and the planned expansion of parks under the Green Network Plan suggest that paying for maintenance is going to be an ongoing challenge.15 In addition, not every vacant lot is turned into a park or playground. Whether vacant houses are replaced by parks or vacant lots, does demolition really improve public safety? I believe a sincere commitment to improved public safety in Johnston Square, Sandtown-Winchester, and every Baltimore neighborhood requires a different approach.

Stay tuned for a much deeper history of demolition in Baltimore and more background on the academic research related to public safety, demolition, and parks! Thanks for reading.